China has launched a gigantic “mothership” to launch swarms of unmanned aerial vehicles for maritime reconnaissance and surveillance operations.

Named the Zhu Hai Yun, the vessel is reportedly equipped with an advanced artificial intelligence operating system for semi-autonomous operation.

In addition to launching drone swarms, the Zhu Hai Yun can be employed as a hub for other unmanned weapons and surveillance systems.

The vessel has a wide deck for carrying various platforms and can sail at 18 knots (33.3 kilometers/20.7 miles per hour).

When navigating ports, a crew can control the vessel by remote control or manually onboard for monitoring.

The Zhu Hai Yun is expected to be delivered to the Chinese Navy by the end of this year.

The recent launch is one of many recent investments China has made in its maritime defense capabilities.

Earlier this year, the Asian nation announced that its second Type 055 warship, the “Lhasa,” is combat-ready after intensive maritime drills.

This month, satellite imagery showed that the Chinese Navy had built mockups of a Taiwanese port and military vessel to serve as targets for its high-powered weapons. 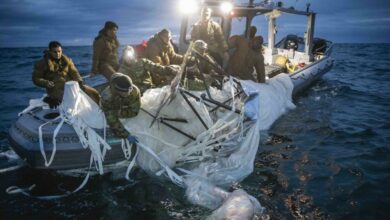