The US military is partnering with Elon Musk’s SpaceX to explore the possibility of transporting military systems in a rocket anywhere on the globe in merely 60 minutes.

While the project will assess the costs and technical challenges of the project, General Stephen Lyons, head of US Transportation Command, said that the initial tests can be expected by as early as 2021.

“Think about moving the equivalent of a C-17 payload anywhere on the globe in less than an hour,” Lyons asked a virtual audience on October 7.

A U.S. military team is working with @SpaceX to flesh out the prospect of shipping routes that pass through space, the head of @US_TRANSCOM said. "That group could…demonstrate whether quickly sending cargo around the globe via space is feasible." READ: https://t.co/bhF2AlACDR pic.twitter.com/xPs27JsEiu

The US military’s C-17 Globemaster aircraft can carry a payload of over 74,000 kilograms around the world with a speed of 590mph. The SpaceX rocket could do the same at 15 times less time and reach a speed of 7,500mph, as per the Times.

No Need for Air Refueling

Apart from a quantum jump in speed, the technology also eliminates the en-route stops or air refueling, a necessity of present cargo aircraft, allowing point-to-point rapid movement of resources.

The third partner in the project is the Exploration Architecture Corporation (XARC).

The possibility of ferrying military cargo in a SpaceX rocket was first discussed in 2018 when during a military conference, Air Force officials confirmed that the service has met with the firm’s representatives to discuss it.

“They have talked about moving cargo in space, and we’ve sat down with SpaceX and had that discussion,” said Gen. Maryanne Miller, the commander of Air Force Material Command.

Before that, Musk had discussed the concept of traveling in a space rocket in 2017 at the International Astronautical Congress.

“So, most of what people consider to be long distance trips would be completed in less than half an hour,” he said in the presentation showing passengers in New York City boarding a Starship-class rocket for a 40-minute trip to Shanghai.

Space-X has already developed a Falcon 2 rocket, a reusable rocket designed to carry 22 metric tons of cargo and land vertically in a controlled descent. 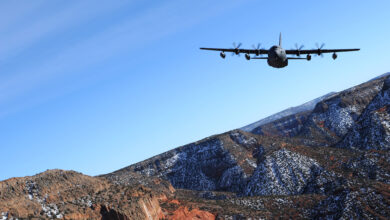