Driven by artificial intelligence (AI) and digitalization, the ongoing armament of the European Union “poses a threat to the populations of Europe,” according to a recent report commissioned by The Left in the European Parliament.

The report, authored by political scientist Christoph Marischka, claims that a serious rearmament using autonomous systems is an anticipation of a global conflict.

“This is not about crisis management, it is about war in a near future,” Marischka said. He further warned these advanced arms can generate new forms of propaganda and surveillance, and could threaten to revive long dormant conflicts in Europe and beyond.

In June 2020, the European Commission approved the first 16 projects involving new military technology such as drone swarms, unmanned ground vehicles, and the reinforcement of cybersecurity.

Concerns about these technological developments revolve around how it changes the way countries operate in war.

Özlem Alev Demirel, a German politician serving The Left in the European Parliament, warned that the “current armament spiral” goes beyond drone swarms and killer robots but also “threatens to do away with familiar distinctions between war and peace, civilians and combatants, and to completely lift the boundaries of the battlefield.”

“AI increases the likelihood of war because it’s easier to conduct #warfare by pressing a button. #AI makes it easier to convince civilians at home that such actions can be conducted without losses” – @OezlemADemirel pic.twitter.com/3zZ4OqgBuB

She warned that what was once thought of only as dystopian fiction could become reality sooner than expected. “Instead of participating in this misguided arms race,” she said, the EU should “devote its full energy to the regulation of autonomous weapons systems, cyber warfare, and propaganda.”

Elsewhere, other groups have also called on the European Commission to address this issue. More than 60 civil society and rights groups have established the need for proper limitations in AI use to ensure that it is safe, legal, and does not discriminate.

Other groups on the political left have urged the EU to stop this “arms race,” asking them to implement regulations or even impose a complete ban on AI weapons and cyberwar. 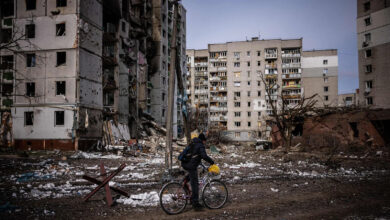