The crash appears to be the first of its kind for the troubled F-35 program, marking an unfortunate moment for the most expensive plane in history.

Speaking on condition of anonymity ahead of an official announcement, a defense official told AFP that the Marine Corps F-35 had crashed outside Marine Corps Air Station Beaufort in South Carolina.

The Beaufort County Sheriff’s Office said the pilot safely ejected and was being evaluated for injuries.

Military plane crash in Beaufort near Joe Allen Drive area. Appears to have crashed on a bluff/island owned by Clarendon Plantations. Not usually many people over there. Praying for the safety of all involved! pic.twitter.com/dM5a8v2lg1

The U.S. Marine Corps F-35B variant is capable of taking off from a short runway and landing vertically. The Air Force and Navy have their own models.

The crash comes just one day after the U.S. military first used the F-35, which has been beset with delays and cost overruns, in combat. Multiple U.S. Marine Corps F-35s struck Taliban targets in Kandahar province, Afghanistan.

With a development program beginning in the early 1990s, the F-35 Lightning II is considered the most expensive weapons system in U.S. history, with an estimated cost of some $400 billion and a goal to produce 2,500 aircraft in the coming years.

But, once servicing and maintenance costs for the F-35 are factored in over the aircraft’s lifespan through 2070, overall program costs are expected to rise to $1.5 trillion. 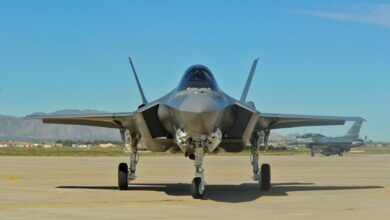