During four tumultuous years under Donald Trump, boosting the sale of American weaponry was viewed as an end in itself rather than as a means to an end. With President Joe Biden’s priority of rebuilding America’s international alliances, of which US arms sales are a vital element, it is past time to fix this mistaken vision.

“Trump has used his job as commander-in-chief to be America’s arms-dealer-in-chief,” said global arms trade expert William Hartung last year. The Center for International Policy scholar further declared that Trump is “on steroids in terms of promoting arms sales for his own political benefit.”

Consistent with this priority, the Trump administration made arms sales a key part of the job description for diplomats, attachés, and other officials, whether assigned to US embassies or visiting foreign countries on government business.

However, just as our nation’s international relationships should be based on principles of mutual benefit and contributing to security and stability, so should sales of American arms.

The attendant effects of arms sales — such as providing additional profit for US companies, reducing US Department of Defense costs due to economies of scale, and generating additional research opportunities for equipment also used by the US military — should be associated results rather than primary objectives.

In my seven years of leading Air Force International Affairs as Deputy Under Secretary between 2003 and 2010, we worked with the Departments of Defense and State, regional commanders, and US Embassies to integrate our strategy, goals, and efforts to provide armaments to partner nations that would promote and be in accordance with US national security objectives.

Our approach with our foreign partners — not “customers” — was to promote interoperability and strengthen the US-to-foreign partner relationships that would be in the best interests of both.

Such relationships foster the willingness and ability to deter and, if necessary, defeat common foes. However, such an approach only works if it is part of a “whole of government” effort. There are many results of properly vetted — and reviewed by Congress, when required by US law — arms sales to allies and partners, and they are not limited to (nor principally about) the beneficial effects to the American economy and defense contractors.

The capabilities that partners gain are also not limited to platforms and weapons systems themselves. The improved abilities also emanate from the training, tactics, and doctrine provided by the US military services, in conjunction with the procurement of US-origin military systems.

These many benefits contribute to the ability to operate and, when appropriate for both nations, fight together to prevail against common enemies. More significantly, such capabilities contribute to regional stability and the deterrence of conflict.

Properly vetted and coordinated arms sales are also a means of influencing partner countries in the promotion of human rights, equality, and opportunity.

Most often, especially in the case of sales of major defense systems, the military men and women who will operate the equipment are trained in the United States, alongside their American counterparts.

Our partner countries generally send their best to train in the US. I have often observed these foreign military members years later rising to the highest levels of the military and, perhaps, government. This, in turn, benefits their nation, armed forces, and our mutual security.

In another example, we worked with a nation whose armed forces had traditionally and culturally limited the roles of women. Through collaboration centered around the military platforms the US sold them and trained them on, the most challenging career fields for the women of their armed forces opened up. This included the opportunity to train on, qualify in, and pilot US-origin high-performance aircraft, something that previously would have been unthinkable.

While arms sales derive many tangible benefits (such as lower costs), some outcomes (improved ties and interoperability) are difficult to gauge precisely.

Nevertheless, the effectiveness of US arms sales policy should not be measured merely by the dollar value of these sales. Doing so drives more and more sales without careful due diligence of purpose and effects.

As we approach the 20th anniversary of the heinous terrorist attack on our nation, we should remember and heed a key lesson of 9/11.

As great as our nation’s military capabilities and armed forces are, we cannot prevail or fully defend against terrorism and other external threats alone. We need allies with the right capabilities and the disposition to work with us in achieving optimum mutual defense while also maintaining the capabilities and determination to provide for their own security and regional stability.

Appropriate arms sales contribute to those capabilities and build the relationships necessary for a reliable and effective mutual defense. That should be the principal objective of our arms sales policy. The Biden administration would do well to make this one of its many important objectives and priorities.

Bruce S. Lemkin is a former Deputy Under Secretary of the Air Force (International Affairs). He also is a retired US Navy Captain and a former international negotiator. He is a Fellow of the American College of National Security Leaders.  The views expressed in this commentary are his own. Netherlands, US to Provide Ukraine With 90 Czech T-72 Tanks 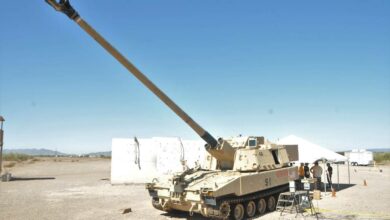