The US said Monday that two long-distance warplanes flew across the Middle East as part of a simulated international bombing exercise amid tense haggling on restoring a nuclear deal with Iran.

Top US general Lieutenant General Alexus Grynkewich said the “Bomber Task Force” simulation on Sunday showed that the US and its allies can “rapidly inject overwhelming combat power into the region on demand.”

“Threats to the US and our partners will not go unanswered,” added Grynkewich, commander of the combined forces air component of US Central Command, an area that covers Northeast Africa, the Middle East, and as far as Central and South Asia.

The general did not name potential adversaries but the US is locked in intense negotiations over reviving a deal to limit Iran’s nuclear program.

The US said last week that Iran’s response to the latest proposed deal was “not constructive.”

Iran’s foreign ministry said Monday that it had not received any official US reaction to its demands.

European-brokered talks on restoring the 2015 accord – abandoned by the US in 2018 – have been ongoing in Vienna since April last year, but have repeatedly stalled.

The European Union has said that a text put to Iran last month was the final one.

The US air force has recently hit Iranian-backed militia in Syria while Grynkewich said last month that the US was “committed to regional stability whether that means deterring Iran, (or) countering violent extremist organizations.”

A Central Command statement said fighter jets from Britain, Kuwait, and Saudi Arabia escorted the two B-52H Stratofortresses from the US Global Strike Command on Sunday.

In the fourth exercise of its kind this year, the planes started at the Fairford air base in England and flew above the eastern Mediterranean, Arabian Peninsula, and Red Sea “before departing the region,” the statement said.

US ground and naval units, as well as 16 other nations, including Canada, provided logistical support, the US military said. The US army “simulated firepower from the ground.”

Central Command chief, General Michael ‘Erik’ Kurilla, said: “We have the ability to put a significant measure of combat power in the air alongside our partners very quickly. We can do the same on the ground and at sea.” 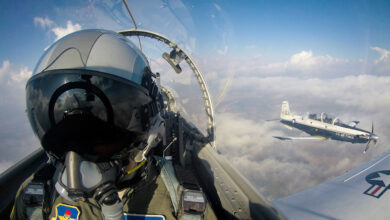