The US Air Force (USAF) drop-tested the Raytheon-made StormBreaker munition from an F-35 fighter for the first time this year, the US defense manufacturer revealed in a statement.

Raytheon added that the late 2021 test was conducted as part of the “smart” munition’s integration process with the fifth-generation aircraft.

The 200-lb (91-kg) air-to-ground munition has been “cleared” for the F-15E aircraft and is currently undergoing evaluation. Once the munition acquires initial operating capability, it will also be integrated with the US Navy F/A-18E/F Super Hornet aircraft.

An F-15E carries a total of 20 StormBreakers, in a group of five, while the more advanced F-15EX Strike Eagle can carry “more than 16 weapons,” the manufacturer revealed.

The 25-year StormBreaker development process began in 2006 when the USAF awarded Raytheon $144 million for risk reduction work on the munition as part of the Small Diameter Bomb Increment II program.

The work took three years, and in 2010, the air force awarded Raytheon a $450 million “engineering, manufacturing, and development” StormBreaker contract.

In 2019, the USAF awarded Raytheon a $200 million life cycle support contract including “integration, production, and sustainment” of the Stormbreaker until 2024.

According to Raytheon, the munition uses a tri-mode seeker, which includes imaging infrared and millimeter-wave radar, “to see through fog, smoke and rain to glide over 45 miles (72 km) and strike at a fixed or moving target on land or at sea.” Raytheon claims that the munition, packed with “shape charge jets, fragmentation and blast charge effects,” can destroy a tank.

Program director Alison Howlett said that the munition offers the option of “adding propulsion or swapping out the seeker depending on the mission.”

Moreover, the weapon can also be launched from one platform and controlled from another. “That will be an important capability as the US military aims to connect sensors, platforms and weapon systems across the traditional domains of land, air, sea and space.” 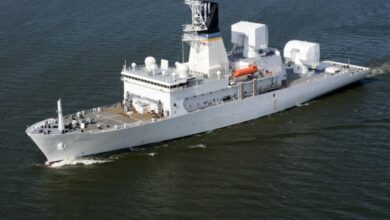