The Royal Navy’s upgraded Spearfish torpedo was cleared for front-line action after passing deepwater trials in the Bahamas, the service revealed in a statement.

Five of the Mod-1 Spearfish torpedoes were fired from HMS Audacious – the fourth of the Royal Navy’s Astute-class nuclear-powered submarines – during the three-day trials.

The torpedoes were assessed at their maximum operating depth at a testing range on Andros Island. Additionally, their “homing abilities were challenged through the introduction of countermeasures.”

Upgrade in Process Since 2010

The BAE Systems Spearfish has been the Royal Navy’s frontline anti-submarine and anti-surface torpedo for three decades. It’s capable of “crippling frigates, destroyers, and large warships, as well as hostile submarines.”

The most recent trials were to enhance the weapons’ capabilities, a process which began in 2010.

In its upgraded version, the weapon features “a new warhead, new, safer fuel system, a smarter electronic ‘brain’ and a fiber-optic guidance link with its parent submarine to improve its accuracy and lethality.”

A BAE Systems statement called Spearfish “the most effective targeted weapon in its class” which will be more than a match for present and future threats.

The world’s most advanced torpedo has been declared ready for front-line action with the #RoyalNavy and undergone extensive deep water trials with HMS Audacious in the Bahamas.

Remaining Torpedoes to Be Upgraded By 2025

Meanwhile, the service stated that following the successful trials of the five torpedoes, the remaining Spearfish will also be upgraded to the Mod-1 version, becoming operational with all Royal Navy submarines by 2025.

“I am delighted to be able to formally declare that the Spearfish Programme’s Mod-1 Spearfish Torpedo has reached Initial Operating Capability,” Programme and Deputy Director Submarines Commodore Bob Anstey said.

“Whilst we remain focused on the ultimate aim of providing the Full Spearfish Mod-1 Operational Capability, the team should be congratulated on achieving this important milestone; a critical step in the process of maintaining the effectiveness of the Royal Navy’s submarine-launched heavyweight torpedo for years to come.” 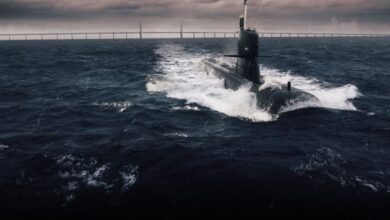